Last Monday, the much-ballyhooed petition to force a referendum on decriminalizing marijuana in British Columbia went down in (wait for it…) smoke.

There are a lot of notions out there as to why the referendum failed—B.C.’s laws on referendums are too stringent, accusations that they were harassed when petitioning in public places—but one thing that interests me is how partisans will use this information. Sensible BC spent three months canvassing the province thought to be the most bud-friendly in Canada about decriminalizing weed, and some areas just didn’t take to the message.

Last month, Paul Wells looked at the Conservative Party attacking Justin Trudeau for his promise to legalize pot, and hypothesized that the party thinks the strategy will play well with immigrant communities.

Whether one agrees, there’s going to be more, not less debates about drug laws in the years to come in Canada, and we have our first point of (non-poll based) data to mull over. Sensible BC released a list detailing what provincial ridings that passed the 10% voter threshold needed for success (20 ridings), which ones got at least halfway there (28 ridings), and which ones couldn’t get even 5% (37 ridings).

Strategists will look at this (admittedly, rudimentary) information and make some inferences. It only seems fair for the rest of us too.

First, there was that provincial election half a year ago. Were ridings that voted for the NDP more likely to pass the magic 10% threshold? 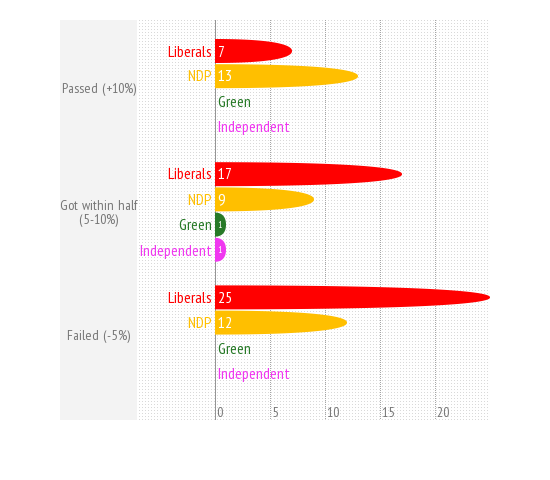 It appears so! This could be due to Sensible BC focusing efforts in areas they thought would be more receptive, of course. At the same time, many ridings in the Liberal-friendly Okanagan and the north—including Christy Clark’s own Westside-Kelowna riding—approved the petition in large enough numbers. In fact, the only Liberal ridings to “approve” the question were outside Metro Vancouver.

Alright, let’s parse through another metric. How about income? We’re going to use average income for people 15 and above from the 2006 census. And we’re going to divide the 85 ridings into 4 roughly equal sections. 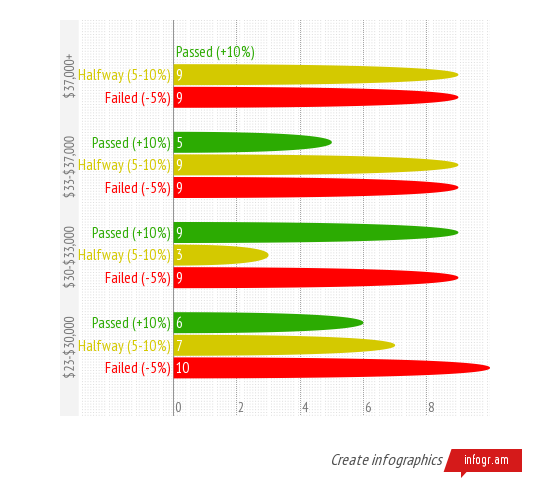 We have to wait until the 22nd wealthiest riding, Vancouver West-End, before we find a place that approved the referendum. So the measure doesn’t seem particularly popular in wealthy communities. Beyond that, hard to discern too much.

How about age? Can we discern anything by the median age of a riding?

It’s often said that relaxing marijuana laws is popular with the youths. Yet Sensible BC’s petition was much more successful in older ridings than it was in younger ones. A full 50% of their “wins” came in the 24 oldest ridings. And the only two ridings in the “youngest” quadrant that got passed the 10% marker were Peace River South and Vancouver West-End, which seems to be an outlier in these for reasons funnier people than I should point out. Of course, a young median age often correlates to communities with plenty of young families, rather than a giant glut of young adults.

Let’s get to final comparison though, the one that Wells focused on in his piece. Put simply: Did ridings with large immigrant communities reject the Sensible BC petition more than the rest of the province?

To see, let’s use the percentage of people whose mother tongue is something other than English as our tool (again, rough tool, rudimentary, etc.).

The petition didn’t just fail in any riding where at least 45% of people had a mother tongue other than English: With the exception of the Downtown Eastside riding of Vancouver-Hastings, it didn’t even reach 5% in any of them. The only places Sensible BC succeeded where English isn’t the mother tongue for 20% of the population were Vancouver-Mount Pleasant and the persistent outlier of Vancouver-West End. And of the 16 ridings with the smallest number of non-native English speakers (6.05-8.18%), the petition succeeded in half of them.

It’s far too simplistic to say that “Sensible BC failed in communities that were richer, younger, more diverse and voted Liberal in the last election”, so don’t do that. There are plenty of other slices of data you could analyze, and a fuller picture could be painted if the organization posted the exact number of signatures they got in each riding.

But there’s inferences to be made here. And it’s easy to imagine politicians acting on them.