If you’re one of those people who start thinking about the next election campaign weeks after the previous one wrapped up, the next federal election offers up plenty of / fun, for a number of reasons. Chief among them is the redrawing of the electoral map to create 30 new seats, giving Canada 338 in total. It’s the largest increase of seats since 1867, when we went from 0 to 181 seats via Confederation.

But what does it mean, you ask? Certainly, your lefty friend sees the headline “Tories stand to benefit from 2015’s new electoral map” and cries GERRYMANDERING without reading the aricle, while your conservative-minded buddy can’t stop ranting about the overzealous commissioners of Saskatchewan destroying rural-urban ridings that epitomize the province’s culture.

For the most part though, there hasn’t been giant controversy over the province-by-province, two-year process of adding 30 seats. Mostly because the majority have found the changes to be reasonable. So while you may have a passing sense of the changes in your local area, there’s been little need for anyone to sort through the riding-by-riding minutiae for a detailed macro-look at Canada’s new electoral map.

So I analyzed the riding-by-riding minutiae for a detailed macro-look at the map. Because you can be a politico neophyte who states generalities like “those extra seats will benefit Harper because the Conservatives dominate in the fast-growing suburbs”, or you can actually discuss what new ridings matter, and which old ridings have a markedly different makeup.

Or you can live a happy, healthy life, but if you’ve read this far we can safely rule that out.

Let’s start going through our diaspora. Current ridings are coloured based on their current MP.

Note: “Margins of victory” cites the difference in percent of vote between the first and second place parties. 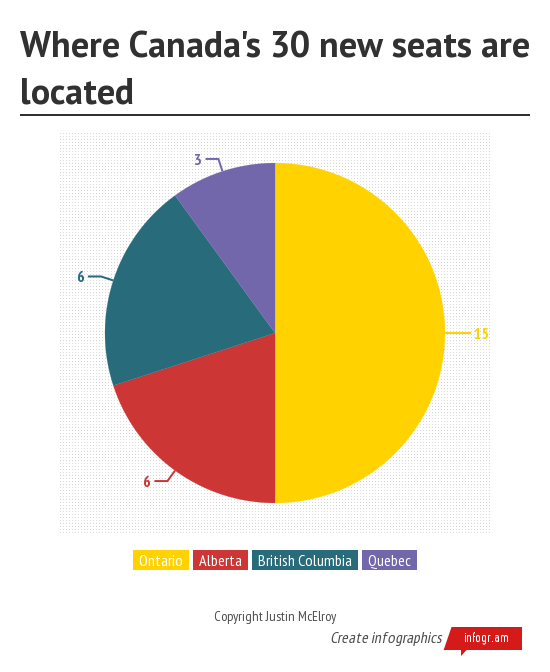 .
Geographical changes: The westerly (Labrador) and easterly ridings (the two St. John’s districts) stayed virtually the same. But the middle four ridings, all Liberal, underwent significant changes to make their populations more even. 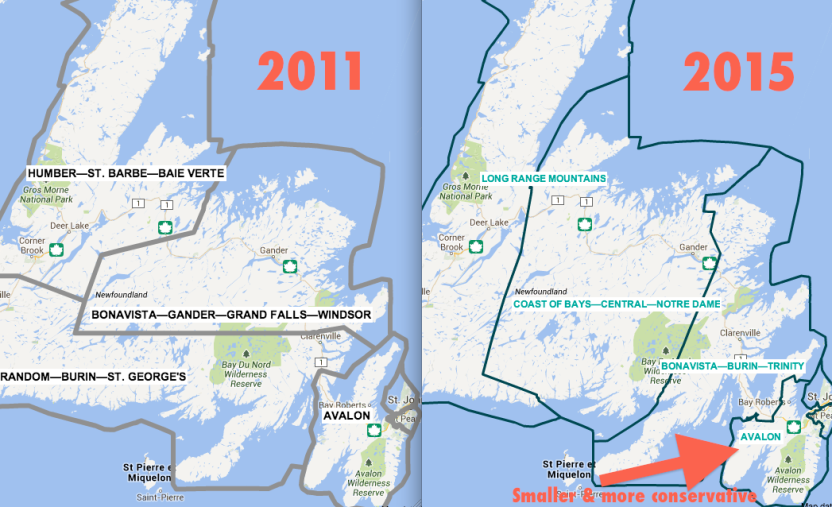 Political changes: In each of those changed ridings there’s a 4-8 point swing in transposed results from the 2011 election. The Liberals won the three outside the Avalon peninsula handily last election, which is par for the course; they haven’t dropped a seat in this area since Bonavista-Trinity-Conception in 1984.

But the smaller and slightly-more-urban Avalon, which went to the Liberals by 3.4% last election, would have gone to the Conservatives by 3.9% under the new boundaries.

.
There are no changes. There rarely are to PEI’s electoral map. This is what it looked like in 1895, back when it had a hearty five seats. 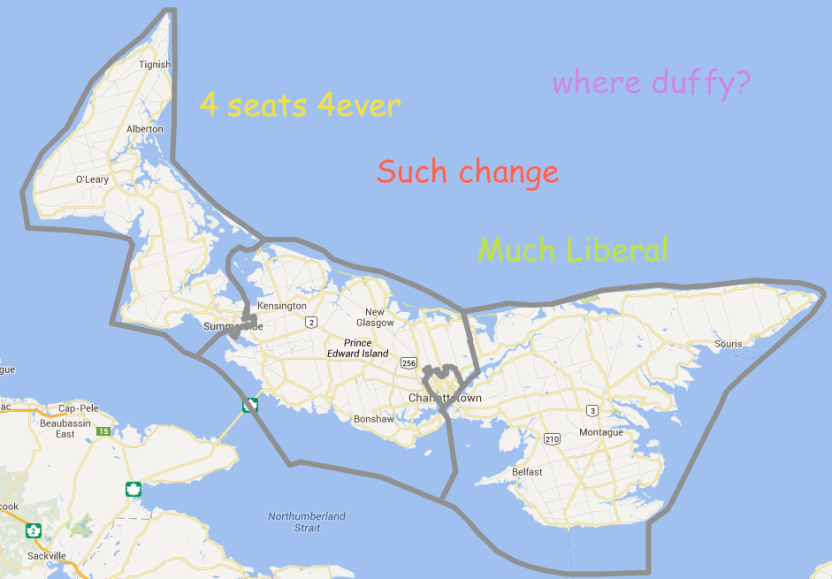 .
Geographical changes: Relatively minor. Sackville-Eastern Shore and Halifax West lose the parts of their areas furthest away from Halifax, Cape Breton-Canso gains the towns between Antigonish and Port Hawkesbury, and Cumberland-Colchester-Musquodoboit Valley loses the “Musquodoboit Valley” part (both in name and geography), but that’s it.

Political changes: Negligible. No riding has changes +/-5% from 2011 as a result of the changes. The closest riding last time, Dartmouth-Cole Harbour, went to the NDP by 1.1% last election, and would have gone to them by 1.7% with the new boundaries.

Nova Scotia didn’t get a map, so here’s their incredibly generalized political breakdown.

.
Geographical changes: All 10 ridings have some changes in boundaries, but they’re fairly minor – with once exception. Most of Dieppe (which is the eastern, more Francophone suburb-city of Moncton) was transferred from Moncton-Riverview-Dippe to Beauséjour, both to even out the population levels and to strengthen the Francophone ties between Dieppe and the communities on the eastern shore. Beauséjour also loses some farmland in the northeast to Miramichi. 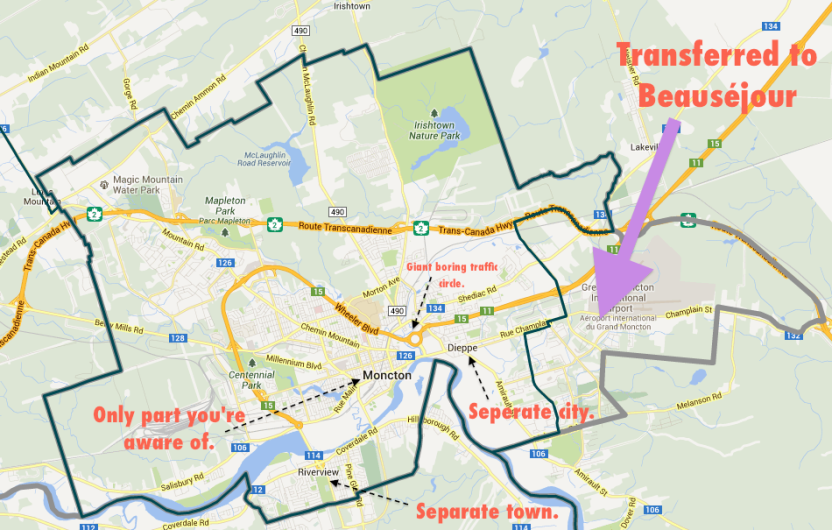 Political changes: The changes to Beauséjour and Moncton-Riverview-Dippe help the Liberals and harm the Conservatives; the former goes from a 5.8% Liberal advantage to a 9% one, while the latter goes from a 10.3% Conservative victory last election to a 6.3% margin with the new boundaries. But these small variations are the largest changes in the province, underscoring the minor redistributions that took place.

Okay, now it gets complicated. So we’re adding a new section.
Where are the new seats?:

In the east, Chicoutimi and La Baie replace Alma and Jonquière as the parts of Saguenay–Lac-Saint-Jean that get a predominately urban riding. The two eastern Gaspé ridings face each other east-west rather than northwest-southeast.

In Montreal, LaSalle, Verdun, and Southwest Montreal had saw major changes to their areas, and the south shore suburbs had a fair bit of tinkering, particularly the Longueuil region.

Are there other minor changes? Yes. You are more than free to examine each one in great detail. We are on deadline here.

Political changes: Despite the fact that 34 of Quebec’s previous 75 ridings underwent “considerable” changes by the commission, there’s only a few places where the new boundaries would have had serious implications last election.

Second, the northern Montreal riding of Ahuntsic moves slightly to the west, becomes Ahuntsic-Cartierville, and goes from the BQ to the Liberals, who would have won the redrawn boundaries with 31.% to the NDP’s 29.9% and the BQ’s 28.3%. Ahuntsic MP Maria Mourani now sits as an independent though, having renounced sovereignty and the Charter of Values, further muddying this riding’s profile.

Brossard-La Prairie becomes Brossard-Saint-Lambert, shifts a bit to the east, becomes more urban — and goes from a seat the NDP won by 13.7% last election to one they would have taken by 6%, 36.8-32.8% over the Liberals.

The rural riding of Roberval—Lac-Saint-Jean becomes plain old Lac-Saint-Jean, gains the town of Alma, and goes from a riding the Conservatives won by 18% in 2011 to one they’d have won by 10.2%.

Finally, the southern regions of Montreal in the Lachine/LaSalle/Verdun area get moved around quite a bit, which makes the NDP happy in Dorval-Lachine (where they would have won by 11.7%, rather than the 7.8% margin in  Notre-Dame-de-Grâce–Lachine) and LaSalle-Verdun (where they go from a 15.5% margin in LaSalle-Emard to a 21.8% margin). This comes at the expense of their 20.4% margin of victory in Jeanne-Le Ber last election — that gets downgraded to a 14% margin in the new riding of Ville-Marie. The other riding in this vicinity, Westmount-Ville-Marie, stays the Liberal camp with Marc Garneau, with his margin of victory expanding slightly from 1.6% to 3.1%. This paragraph will be on the “advanced” part of the imaginary test.

Of course, Quebec tends to move electorally in waves anyway, so this level of detail may be moot. But all told, there’s there’s only 7-10 ridings where the electoral changes could have any political impact.

Next time, we’ll tackle 121-seat Ontario and its  15 new ridings. That won’t be difficult at all.