There’s something about having untold “fake” followers on Twitter that bugs me. More than most things bug me.

Part of it is the blatant dishonesty. The new followers aren’t, in any common usage of the word, real people. Or even a real (shudder) brand. They’re plants. Phonies. Deliberately added to create a false impression.

The second irksome thing is that deliberately gaining fake Twitter followers is a sign of vanity and status-pushing. The only reason to add fake followers is so people think you have more real ones. So they will hold you in greater esteem.

Which is fine, in the sense that most people are needy. But most don’t take such big shortcuts on social media to achieve it. Which goes back to the dishonesty.

But the final strike is that it’s hard to directly and specifically call people out this practice. We inherently know it’s ethically dubious. Yet we often discuss inflated follower counts with whispers and gossip.

There are plenty ways of determining the veracity of followers, but most are fairly broad and don’t bore into the absurd details of ghost accounts. This is mostly because most people have better things to do with their lives.

Well, I don’t have better things to do with my life. And after Chris Parry said that Vision Vancouver had increased their Twitter account by about 11,000 followers in one day, I decided to do some snooping. The nice thing about Twitter is that it lists followers in reverse chronological order, so all you have to do is press the spacebar many times.

I pressed the spacebar many times. So buckle in. This will be long and often boring. But hopefully illustrative.

(I’ll note here that that Kevin Quinlan, Director of Policy + Communications for the Mayor of Vancouver, tweeted hours after I posted this that “FYI neither of them (referring to Vision Vancouver and Gregor Robertson) purchased followers, it’s all spam. Twitter already contacted to have removed #vanpoli“. So this post might be a historical oddity quite soon, existing solely as a tribute to the mental descent of an insomniac reporter as he ponders the nature of authenticity. You have been warned. ) 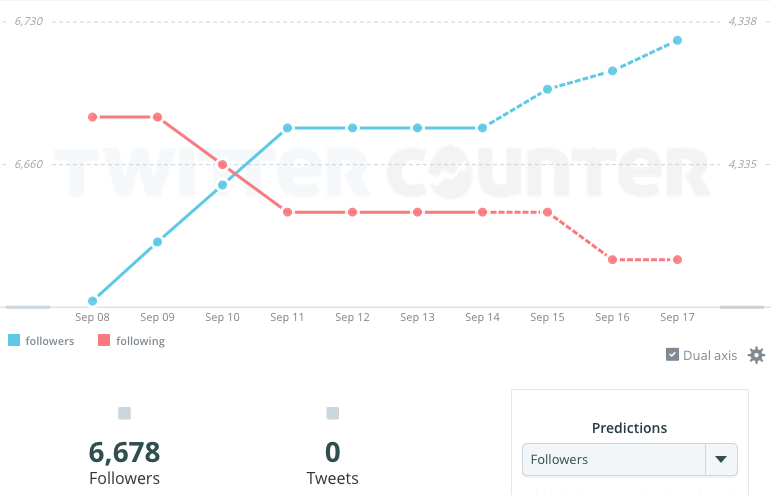 As of a couple of days ago, Vision Vancouver had 6,678 followers, according to Twitter Counter. As I type this sentence — and this em-dash — they have over 19,600.

Who are they? Well, this is what first comes up when I look at Vision’s followers (as I type this, in the middle of the night, alone).

A nice cross-section of people, events, and #brands. Most have a sizeable amounts of “authentic tweets”.

There’s also Trident Financial, a nondescript corporation that sounds dry as paste. I’m sure there’s nothing to note there. Let’s scroll down.

That was a lie. Dorothy Bell and Vince Sharma? You’re cool. Props for following a political party you like. Whatever floats your boat.

Things are getting repetitive. One time the same account background was shown back to back. Several of the accounts had the same maddening peculiar picture of a girl blowing a bubble. Virtually all of them looked like young people. But none had a description. And every single one followed Trident Financial, and only Trident Financial.

This is getting depressing, isn’t it? Why don’t we take a break and look at the 13 accounts everyone is following?

Yep, the majority of Vision’s followers also follow Car Interiors, Rent A Goat, Bang Erik!!!, and a number of other accounts which have many, many more followers than you think they probably should.

Alright, back to the grind. Now, I’ll be blunt. At a certain point, I didn’t look at all of these. Instead, I scrolled through a list of hundreds of accounts, none of which had any bio, and intermittently on every 20th one or so to see if they were unique in any way.

They were not. Unless you count thousands of people loving Rent a Goat unique.

They also following the same 13 people, including our friends at Rent A Goat. And still had no bio. And still hadn’t tweeted. Onward we treck.

Still no sign of any bio in any of the accounts, or any followers, or any people they’re following someone outside the blessed 13. There are plenty of pretty ladies in the profile pictures. But they, like everything else in this wasteland, are not what they originally seem.

There is still no real humans, and no variation. I’m starting to miss Trident Financial, and getting a bit upset at the lack of creativity. The background of Fran Gertha (1431 followers in) may have some sage advice on  my quest. 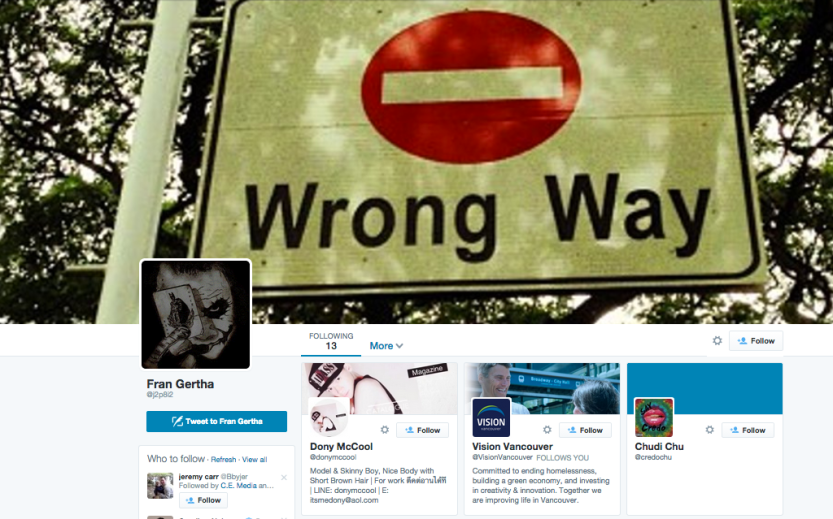 No Fran. I must persist.

A funny thing when you press the spacebar hundreds of times on Twitter: It starts to slow down. So do your other windows. Like climbing Everest, searching for any variance in Vision’s followers becomes more arduous. I must bid goodbye to other windows, and focus on the task at hand.

We still have not reached a person with any bio, any tweets, or accounts they follow other than the 13.

Okay, Rent a Goat is still there. As are a lot of those original 13 accounts. But there is new information here, a new authenticity, giving hope that maybe, just maybe, we have found something new. Or at the very least, a more creative group of ghost accounts.

We go back to 13. The accounts will interchange between 13 and 36 followers for a while, before settling on 36. Permanently? We shall find out.

Yep. Permanently at 36. What’s perplexing is how blatant the fakeness of these followers is. There are so many duplicate pictures that some have been used 10 or 15 times by this point. And there is not a real person to be found. If you’re going to add 13,000 fake followers (not that I’m suggesting such a thing), you think you would do so in intervals, so there would be some variation between real people and fakes.

The New York Times reported that “in many cases, high-quality false Twitter accounts are nearly impossible to discern from the real thing. Those that sell them claim that they can make up to a million dollars in one week.”

These accounts are not of that quality.

That New York Times report came in 2012, soon after the topic of fake Twitter followers became mainstream—though it started the year before, when it was revealed that most of Newt Gingrich’s million-plus were less than real.

One fun story came from Slate, where a writer bought 27,000 new followers for $202 and kept them for months — but as soon as he wrote about it, Twitter deleted the accounts.

Whenever the topic was brought up, analysts said that for high-profile people, the benefits of having an “enhanced social media profile” wasn’t worth the risk.

“They wind up with a lot of dead weight, and there’s also a real risk in backlash stories when someone notices, for instance, that a brand’s followers spiked 20% in a day. This is an age where authenticity is especially valued,” said David Berkowitz, VP of Emerging Media at 360i, to Forbes, also in 2012.

And yet, it endures. “If you’re not padding your numbers, you’re not doing it right,” said Dave Murrell to the Wall Street Journal in late 2013. “It’s part of the game.”

We’re still at 100% bio-less accounts since the 14th most recent follower, if you’re curious.

Or Twitter isn’t expecting you to scroll through so many people. It’s probably the latter. Probably.

But this happened several times, which would have been quite vexing if I had anything worthwhile to do tonight.

I do not have anything worthwhile to do tonight.

You know what I really dislike on Twitter? More than other things? Intensely political accounts. Ones that send out blithe talking points all the time, or press releases, or links to torqued news stories. Ones that pick fights for people for no reason. Accounts, controlled by people, that never show any doubt, any nuance, or any possibility that their political party of choice might be anything than 100% right 100% of the time.

I could really go for seeing one of those accounts right about now.

What we lack is reality. The falcon cannot hear the falconer.

Of course, we all get fake followers. Some times, their source is obvious — we tweet something, a company related to that something follows us, and the marketing circle of life continues. More often, a random bot or ghost account will follow us out of the blue, and there’s no rhyme or reason to the algorithm.

A couple of months ago I became “verified” on Twitter, and while the air wasn’t cleanser nor the sun brighter, I sure had a lot more random accounts following me that had no connection to B.C. news. And I happily accepted them, because what are you going to do?

Everyone is guilty of inflating their self-worth on the Interwebz. But some of us are more guilty than others.

And Vision Vancouver appears to be more guilty. I can’t search past 10,000 followers with the programs I’m using, so our journey ends. But we’ve been stuck at accounts that follow Vision and 35 other accounts people—but have no bio, no tweets and no followers—for some time. What we do know is that 10,000 fake accounts started following them at virtually the exact same time. I’m going out on a limb and suggest the remaining 3,000 accounts are much the same.

There could be innocuous reasons why Vision suddenly has 13,000 ghost followers, reasons that have nothing to do with a municipal election happening in two months. Or it could be that they added fake followers for the same reason so many do.

And if that’s the case? Well, that’s campaigning. Politics is dirty pool. Social media is predicated on people manipulating their image. Sports teams paper their arenas. Companies inflate their net worth. It goes on. Everybody does it, right?

Which is why even though it bugs me, I guess I’ll move on. Let someone else get cranky in the future.

There’s plenty of opportunities. After all, I hear @mayorgregor picked up 10,000 new followers this weekend.