If there’s one thing I’ve learned in the 17 months since I ranked and described every single Heritage Minute in Canadian history, it’s this: Write 18,000 words and create 183 GIFs about something niche, and you’ll trick people into believing you are an expert about it .

And so, I’ve had the privilege of my Heritage Minute ramblings being cited in a university syllabus, being used in a great podcast eventually presented on CBC Radio, and had plenty of people complain that I ranked their favourite minute too low.

Most amazingly, I was asked by Historica Canada to be part of their Heritage Minutes Advisory Committee, which means I’ll be providing feedback to the people making Heritage Minutes for the next year, which is such a ridiculous sentence that it deserves its own GIF.

But as 99% awesome as this news was, there is a 1% downside: my plan to add the four most recent Heritage Minutes into the rankings will be delayed. I can’t objectively write about the “modern” Heritage Minutes while I’m (very slightly) involved in the making of new ones.

The only way I could write about a new Heritage Minute is if I somehow missed one of the vintage editions that aired during the 90s. Which would never happen, because I obsessively made sure I watched, described, and ranked every single one.

Or so I thought. 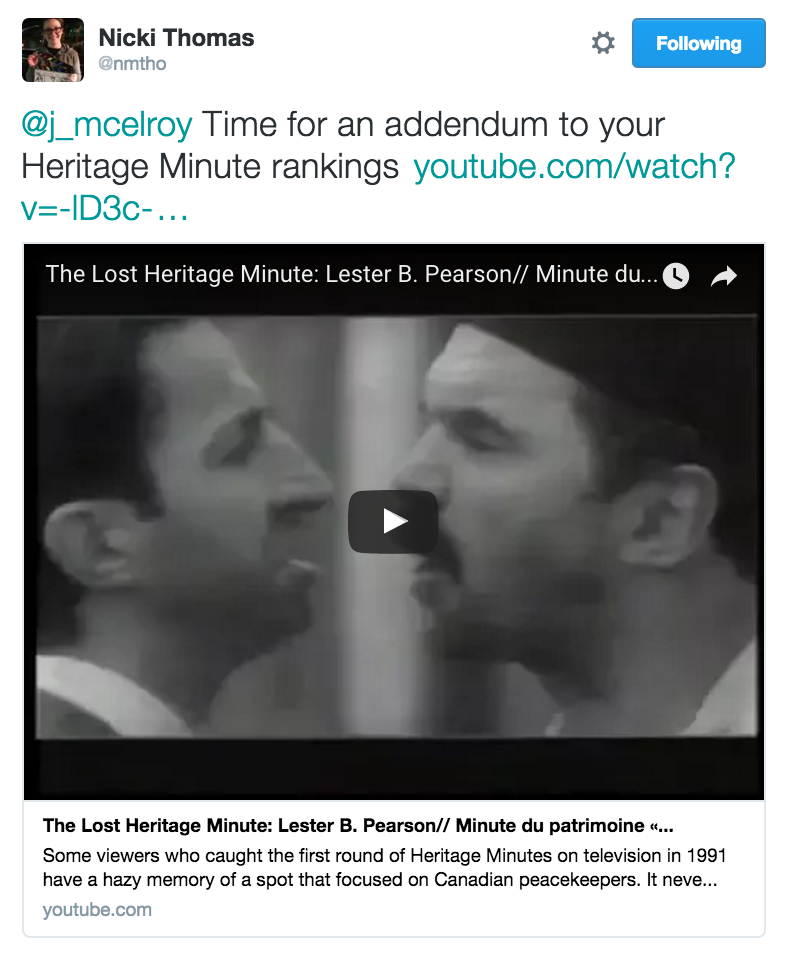 It was then I learned that Historica Canada recently discovered a long lost Heritage Minute (!), one of the very first ever made (!!), about Lester Pearson and peacekeepers (!!!), which caused a diplomatic tiff between Canada and Turkey (!!!!), and, nearly 25 years after it was removed from circulation because of inaccurate costume details, was being re-released to the public.

Time to rank this sucker.

There are many ways you could rank Heritage Minutes—by silly facial hair, contrived conversations, abrupt transitions, placement of heartwarming music, etc.—but there are two overriding factors that make a Heritage Minute great, to my mind.

First, it feels like a Heritage Minute, in all the best ways. By which I mean: silly facial hair, contrived conversations, amazing exposition, abrupt transitions, placement of heartwarming music. But also twist endings, hokey accents, even hokier costumes, dramatic staredowns, Powerful White Men Being Skeptical, and narration that ties everything together. And of course, a Burnt Toast moment, where somebody has a Eureka! situation prompted by the most innocuous of situations. Each minute will be ranked out of 10 on the Heritage Factor, which can be generally summed up as “Could this minute-long video be anything other than a Heritage Minute?”

Second, the person/event/thing it celebrates is quintessentially Canadian. By which I mean: Adorable. Earnest. Self-congratulatory. Slightly irrelevant. Heritage Minutes have created consciousness but also reinforced stereotypes. Each minute will be ranked out of 10 on the Canadian Factor, which can generally be summed up as “How much do we value this thing as part of our identity?” Bonus points if that thing is inherently silly.

And remember—if you don’t agree with my system or point choices, you are free to rank everyone yourself.

(What’s that? You have way better things to do with your time than devote 50 hours of your life to an exercise few people will ever read, let alone care about? YEAH THAT’S WHAT I THOUGHT .)

Anyway. Let’s do this. It’s time to celebrate our 14th Prime Minister, Canadian archetypes, and not shooting people.

The plot: A stresed-out family (the baby is crying, so you *know* they’re stressed out), and are running through a mysterious land. In black and white, for some reason.

Suddenly, stressed-out father (with gun!) runs into another stressed out guy. Other guy has a different skin colour and outfit. I’m sure this will play out peacefully.

Okay. Maybe not. Let’s see if they can resolve this!

Okay, definitely a no.

Suddenly, just when the situation needs someone to step in and KEEP the PEACE, a soldier arrives on scene. Who could it be?

That, my friends, is exposition delivered with passion.

But how will our Canadian hero solve this problem?

With polite but stern words. Because Canada.

The UN peace force was designed by a Canada, Lester Pearson,” says the narrator. “In 1957, for his dream that soldiers could make peace instead of war, he received the Nobel Prize.”

The takeaway: Canadians are good at telling people not to shoot each other.

Heritage Factor: 7.8. There’s a lot to enjoy this minute. The shouting. The throwing in the most important information (“BTW, Pearson won the Nobel”) at the very end. The random choice to make it black and white. And especially, the exposition by angry white guy, who made sure to mention the peacekeeper’s nationality in the middle of his screaming).

However, it isn’t elite. The middle drags a little bit (yeah, we get it, you’re both angry at one another), and the whole “I’m going to kill you” vibe makes it less PG/whimsical than the greatest of Heritage Minutes. And most disconcertingly, there’s no “burnt toast” moment when people realize that Canadian Peacekeepers Are Important.

Of course, this was one of the very first minutes produced, and they would perfect the form in due time. This, however, is a solid start.

But the problem is, those are two different stories, and this minute tries to tag on the Pearson cherry on the “here’s how Peacekeepers” work” sundae, and it doesn’t quite work .

So where does it rank? With 14.9 points, this minute ranks 22nd all time – better than the Louis Riel minute, worse than the Laura Secord one. It’s a solid minute…but lacks a quintessential moment or special bout of Heritage Minute-ridiculousness to truly rise to the highest levels.

(If you like wasting time, you can see my full rankings here)