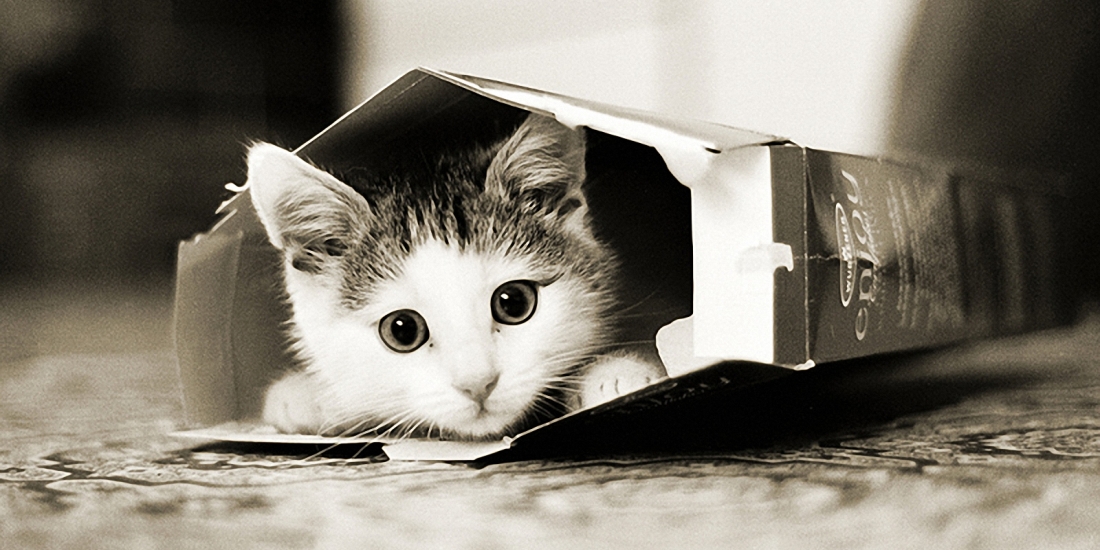 It’s been six months since the last time we looked at B.C. candidates for next year’s federal election, so let’s take another perusal.

Truth be told, there hasn’t been much action in the first half of 2014, despite five MPs announcing their impeding retirement and the addition of six new seats.

There are a couple reasons for this. One, it’s bloody early — the election is scheduled for October 19, 2015, and even if it happens before then (there’s no tangible evidence of this, but plenty of speculation!), it’s hard to expect most sane people to start campaigning for jobs a year in advance.

There are also less swing seats encouraging early campaigning in B.C. than in many other provinces. Just 11 of 36 ridings were won by a margin less than 10% last election, most comfortably taken by the Conservatives or NDP.

(Yes, the Liberals are resurgent in the polls. However, B.C. is very much an NDP-Conservative province on election nights, especially outside of Vancouver. If you don’t believe me, here’s a graph!) 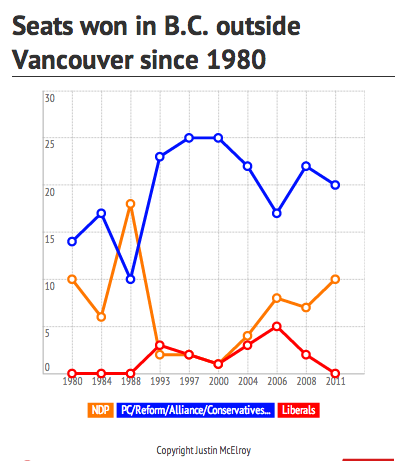 Finally, municipal elections are this November, and common wisdom is many would-be candidates are waiting for this election cycle to end before making a decision on 2015.

Having said that, there are declared candidates and active campaigners in most of B.C.’s 40 ridings, so let’s take a look at where things stand right now, from least to most interesting.

As decided by me, somewhat arbitrarily and more by category than by specific riding.

And as periodically represented through cat gifs.

(Remember, riding boundaries will be drastically different this election, so all numbers in brackets denote the party’s hypothetical margin of victory in the 2011 election under the new boundaries)

All of these MPs won handily last time, are running next year, and have no challengers yet. While a Quebec-in-2011 paradigm shift could stop them from returning to Ottawa, they’re sitting comfortably on their thrones for the moment.

The Liberals have already nominated Stephen Fuhr, a former air force pilot, as their candidate in Kelowna-Lake Country. Aboriginal businessman Louis De Jaeger has also put his name forward for the Grits in Chilliwack-Hope, but hasn’t been nominated yet.

While they may not get much attention in their longshot bids, “Princess of Pot” Jodie Emery will. Emery, husband of famed marijuana activist Marc Emery, has said she intends to run for the Liberals in Vancouver East. Whether the party approves her is one thing. Whether she wins the nomination is another. But defeating Libby Davies, who has increased her margin of victory in all six of her elections? Why, it’s almost as unlikely as a a cat playing Jenga!

All four of these ridings could go to another party in certain circumstances, but so far candidates from other parties have been lacking. For the moment, these MPs have nothing to worry about.

Goldsmith-Jones may not be the only mayor running in the riding—former Whistler mayor Ken Melamed says he’ll seek the Green Party nomination (as is writer Michael Maser), while Elizabeth Nordlund is seeking the NDP nomination.

However, all four incumbents were first elected in 2008, and increased their margin of victory in 2011. In other words, the incumbent candidates should be considered the favourite until proven otherwise.

All four of these seats are in areas that habitually elect conservatives provincially and federally, so the most interesting elections will probably be those for the CPC nomination.

In Steveston-Richmond East, school trustee Kenny Chiu is the only Conservative campaigning thus far. In the oddly shaped  Mission—Matsqui—Fraser Canyon, it’s the Liberals who have already nominated their candidate, businessman and farmer Jatinder Sidhu, while the Conservatives are still quiet.

Entertaining free-for-alls are already in place in the other two ridings though. Four people are looking to replace Colin Mayes in North Okanagan-Shuswap including Wane Lippert, the former mayor of Vernon, the largest city in the riding.

This is shaping up as a pretty interesting race. The riding has most of British Columbia Southern Interior, which has been held by NDP MP Alex Atamanenko since 2006. But it’s lost the NDP stronghold of Nelson, while gaining the right-wing leaning town of Penticton, making it more of a Conservative seat.

Atamanenko is retiring, and running to replace him in the NDP are rural regional district director Margaret Maximenko and ecologist Richard Cannings. Meanwhile, the Conservatives already have their candidate—Marshall Neufeld, a realtor former assistant to Stockwell Day. It’s a diverse riding with no incumbent and no real history, so it bears watching.

But it’s also far away from Victoria and Vancouver, so it probably won’t get as much attention.

Rankin, May, and Garrison have no competition yet, but all three races have the potential for intrigue. Saanich—Esquimalt—Juan de Fuca has been decided by less than five per cent in each of the last three elections, the Green Party came within 1200 votes of the NDP in Victoria during the 2012 byelection, while eyes will be on May to see if she can repeat her historic 2011 election performance. A strong nominee in any of these ridings will get the attention of the Victoria press corps.

The creation of Burnaby North—Seymour, a riding split between North Vancouver and Burnaby, forced a shifting of ridings east of Vancouver. Like so.

The net effect seems to have incentivized new candidates to dip their toes in the political waters. In Burnaby North-Seymour, the Liberals have chosen entrepreneur Terry Beech, who became a Nanaimo councillor at 18. The Conservatives are currently facing a race between North Vancouver councillor Mike Little and businessman Daren Hancott, while recent graduate Trevor Ritchie and actor Michael Charrois are fighting for the NDP nomination.

Burnaby-Douglas NDP MP Kennedy Stewart is moving to Burnaby South and gotten his party’s nomination, while Conservative Mike Calingo and Liberal Adam Pankratz are seeking the same from their parties.

Unfortunately, this is even more confusing, so we’ll go quickly. Nanaimo-Ladysmith is a slightly more conservative incarnation of Nanaimo—Cowichan, which NDP MP Jean Crowder has held since 2004. She’s stepping down, leaving four candidates from the party vying to replace her—First Nations councillor Natasha Bob, Islands Trust Council chair Sheila Malcolmson, school teacher Kip Wood, and lawyer Dominique Roelants. NOT running is Paul Manly, rejected for his views on Israeli-Palestine issues, or Laurie Gourlay, rejected because he wants Vancouver Island to become a separate province. The former has caused more consternation than the latter.

Conservative MP John Duncan has elected to run (and gotten the nomination) in Courtenay-Alberni—which became open after fellow CPC MP James Lunney announced his retirement—instead of Vancouver Island North—Comox—Powell River, where he’s served as Vancouver Island North MP for all but two years since 1993.

Finally, the riding of Cowichan—Malahat—Langford, which is also sans incumbent, has several candidates vying for a nomination. For the Conservatives, Duncan councillor Martin Baker is facing off against former provincial Conservative Party candidate Damir Wallener.

None of the ridings have a true incumbent, and all of them profile as NDP/Conservative tossups. You want to follow some interesting election fights the next year? Look at northern Vancouver Island.

Vancouver Park Board Commissioner Constance Barnes has already said she’s seeking the NDP nomination in Vancouver Centre. The only question is who else will try and take down Hedy Fry, who has held the riding since defeating Kim Campbell in the 1993 election. Mayoral candidates (Jennifer Clarke), MLAs (Lorne Mayencourt) and MPs past and present (Bill Siskay, Kennedy Stewart, Svend Robinson) have all tried. None have succeeded.

The Vancouver seats profile more as Liberal/Conservative battles, while the Surrey seats have the potential to be three-way fights.

That being said, they’re all the type of close, high-profile seats that will attract high-profile candidates—and when that happens, you can bet the current MPs will snap to attention.

Surrey Mayor Diane Watts, who will not be running for a fourth term, has been rumoured as a candidate in South Surrey-White Rock from the moment current MP Russ Hiebert said he would step down.

Watts’ hasn’t announced her most-mayoral plans yet, fueling speculation to the point where most would like her to just come out with it.

But all of the intrigue in South Surrey-White Rock lies in Watts’ decision—if she runs, her immense popularity virtually guarantees a win, and if she doesn’t, well, another Conservative will be a heavy favourite instead.

No, the most interesting riding in B.C. is Vancouver Granville. There is no incumbent, just one committed candidate, and the NDP, Liberals and Conservatives all have a plausible path to victory with different pockets of strength. The riding boundaries allow for candidates from Shaughnessy, Mt. Pleasant, Marpole, and any number of unique Vancouver communities.

The first major candidate to declare is Jody Wilson-Raybould, a regional AFN chief that has received fawning coverage in the past, for the Liberals.